I'm going to stop because there is no end in sight, but it is finally becoming a matter of course to implementing AI－generated products.

Now, then, what should be done about the rights there...

It is time to get serious about it.

In the previous IP promotion plan

The basic idea is that AI is a "good" thing.

If we go by this, there is no right for AI unmodified products.

However, can this boundary be easily divided?

Let's divide it simply into the following cases. 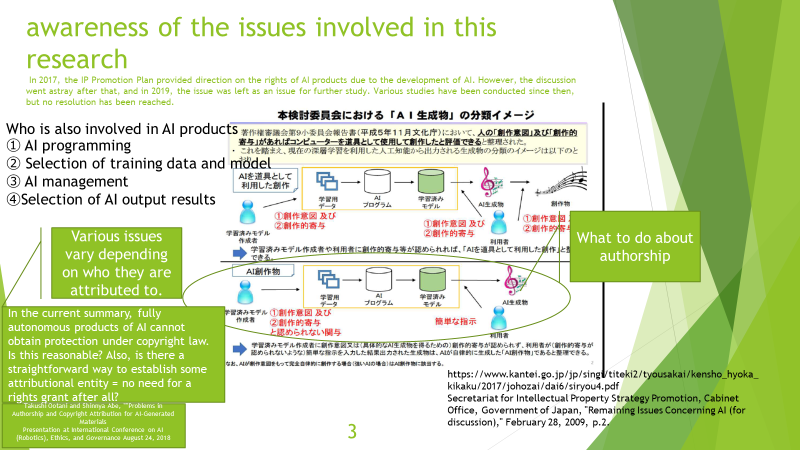 Classification of cases
Wouldn't it be something like this?

In short, it is difficult to judge, and in the case of AI, it is also difficult to determine who was involved in the creative process.

My own theory is the creation theory (?). I once thought that creativity should be the key point, and that it would be better to judge the use of AI as a promotion scheme without considering the use of AI itself as a problem, but rather by determining where the creativity came from.

Scheme.
In essence, it would be the same as control point judgments

Judgment scheme
There are criticisms of control point judgments

The point is that the owner of AI should be attributed the rights, but this may be a problem when the user and the owner are different as in this case (this is also acknowledged in the paper).

If it is not the owner of the AI, then

However, in any case, there would be problems in terms of complexity of AI generation and incentive theory.

Incidentally, since (5) and (6) above can be summarized as almost flexible incentives (with some minor differences), I have combined them into one as (5).

Evaluate incentives based on 7 categories of various theories 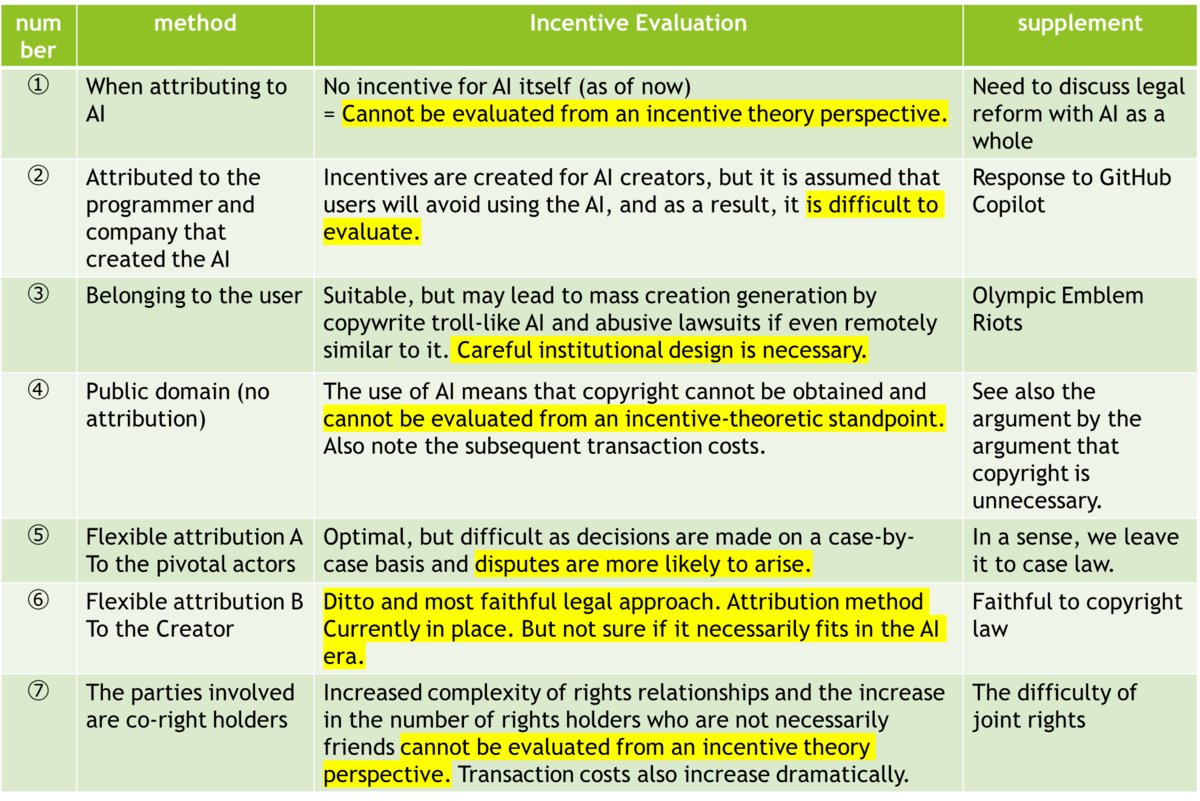 Incentive Comparison
I may not have said it well enough, but I think I can summarize it simply as follows

(This is a very brief summary)

A Study on the Attribution of Rights to AI Products - Focusing on the Motivation of Actions - (jst.go.jp)

Also, already out of stock

(I have taken various things from the papers contained in this book.)

So, the other is the secondary work composition.

This is a method of composing an AI-generated work as a secondary work rather than the original.

However, there are many problems to be solved, such as how to connect primary authors and secondary authors.

We are thinking of putting a group in charge of this.

Well, I wonder about the validity...

(By the way, I actually brought this from the PPT of the presentation at the International Conference on Public Economics...)

I have written too much about my own ideas at this point.

Of course, there is a need for further deep consideration....

The above is just a personal memorandum.

Here is a miscellaneous summary of the government-related activities.

Secretariat of Intellectual Property Strategy Headquarters, Cabinet Secretariat, "Handling of Creative Works Produced by AI (for Discussion)," 2016 (This document is used hereafter as a source showing the main views of the Secretariat of Intellectual Property Strategy Headquarters, Cabinet Secretariat. http://www.kantei.go.jp/jp/singi/titeki2/ tyousakai/kensho_hyoka_kikaku/2016/jisedai_tizai/dai4/siryou2.pdfp16.3-1 slide), two problems are considered if AI-generated works are given protection equivalent to copyright First, "the right to create" is not the same as "the right to use". First, "the number of creations with rights will increase explosively," and second, "the subject of rights is ambiguous (based on the philosophy of the copyright system, "the person who made a creative contribution" would be the subject of rights, but this cannot be specified objectively because it is determined by the actual state of creation). The latter is the problem of authorship. The latter is the issue of authorship.

The above slide of the Secretariat of Intellectual Property Strategy Headquarters, Cabinet Secretariat states, "Candidates for the subject of the right may be (1) the program developer, (2) the provider of data for learning artificial intelligence, and (3) the person who instructed the artificial intelligence with the intention of creation, but how should they be evaluated? (Secretariat for the Promotion of Intellectual Property Strategy, Cabinet Secretariat, above, 2016 p.18.3-3 slides)

The following was shown.

The ones circled in * are straight from old explanations, a bit out of date.

Now, the government system should be moving on a lot soon, so we need to watch for that as well....